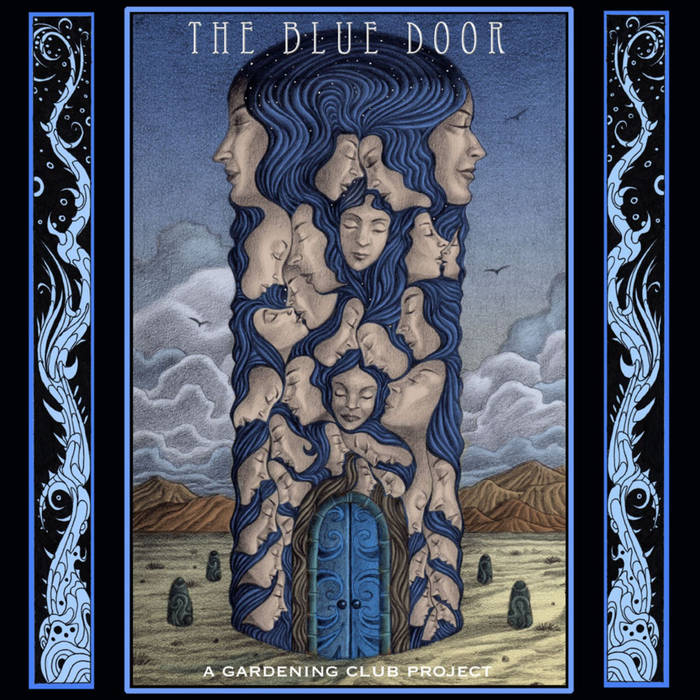 Limited Edition CD-RP only 100 manufactured, includes an autographed 24 page full color book with illustritations for each song as well as lyrics


As metaphors go, it’s hard to avoid the myriad possibilities on offer in a title like ‘The Blue Door’. As if ‘door’, itself, wasn’t enough – this one’s blue! The good news is, if you want to go searching for meaning and connection in these ten deeply involved and involving tracks, you’ll find it. If you’d rather just sit back and sink into an intricate and beautifully woven tapestry of tunes, come right on in. Oops…see what I mean about that door metaphor?

What’s immediately striking about this latest outing is that your green-fingered Head Gardener, Martin Springett (still mining his fruitful fascination for the oblique melodic subtleties of Satie, Stravinsky, et al) has craftily opted for a timeless and trusted managerial tactic. Fans of the recent and hugely impressive Time Trilogy will note the consistent team selection of an exceptionally accomplished band of top musicians once again given the freedom to express themselves at the highest level. Coaches will tell you ninety percent of being successful is about picking the right players. Theatre directors will say the same about casting and, by that same token, Springett is definitely, once again, onto a winner.

There’s a clear sense of development, here, from the themes and ambitious musical stylings so intriguingly explored in The Time Trilogy. This time out, though, it feels like Springett has consciously opted for a more ‘single-concept’ through-line in terms of both lyrics and melody. The opening, ‘Overture’ (fittingly enough), reminds us of exactly where we left off last time out, with its slinky, desert camp-fire percussion and naggingly persuasive guitar motif reminiscent of the thrilling Saharan explorations of Robert Plant and Justin Adams. We’re thus lead into ‘Two Houses’ and the hint of an emerging storyline via an elusive, hovering melody that finally lands us on a path back - ‘Going North’ - towards those loping, camel caravan rhythms so ably driven by Kevin Laliberte’s rippling nylon-string guitar. The song’s lyric-line, meanwhile, drops us, counter-intuitively, into a darkly claustrophobic, back seat journey along a British motorway, all sweeping headlights and the looming threat of too-close traffic. It’s a contradiction that takes the mundane and makes it seem exotic. Soon the narrator’s growing alienation is turning the fading, repeated mantra of ‘anyone really’ – question? statement? cry for help? - into a conflict between faint hope and quiet resignation.

From there, the jagged, restless probing of the title track pushes the eponymous metaphor both ways. This door leads back into memory but also outward to the unknown with all its triumph-and-disaster potential. It’s a deliberately unsettling vibe that coalesces into a wordless, ice-cool, bluesy passage before suddenly bursting forth in a brief but blissful pastorale that does, finally, offer a glimpse of the sunlit uplands of ‘The Path Not Taken’. It’s possibly the album’s most powerful melodic statement; a surging, Steve Hackett-style, tune-metal stomper that sashays and struts like an off-duty Robocop.

The yearning melancholy of ‘Winter Snow’ sees Drew Birston’s slippery fretless bass emerging once more as a dazzling primary colour on Springett’s musical canvas with – something of a recurring sensation, here - the extended coda leaving us with enough splashes of sunlight to warm the previously frozen landscape. Indeed, ‘Mirage’ continues to notch the temperature up and up - right back to desert heat-haze proportions - with the return of those familiar, insistent Phrygian dominant and melodic minor nylon-string runs that can’t help but speak (at least to these timid Anglo-Saxon sensibilities) of wild, possibly even forbidden, Mediterranean passions.

‘The Turning of the Glass’ cools the fever-dream a touch with the soaring melodic promise that, whatever else is out there, music can, indeed, “make a better world”. The sentiment would seem naïve, in isolation, but the album has worked to reach this moment. There’s a sense of resolution, here. We may, after all, find a measure of peace behind that blue door. The tune’s slow-blossoming, ultimately uplifting refrain emerges almost unnoticed until it’s suddenly washing over all the doubts of the earlier part of the journey like a musical sigh; a welcome glimpse of the safe road home.

Nonetheless, ‘I Dream U’ has us looking back towards that still ‘undiscovered country’ (the past? the heart?) where those unrelenting, seductive Andalucian rhythms are determined to sweep us up again into their restless dance of uncertainty. Springett’s vocal line takes on a breathless, spiralling urgency alongside Wayne Kozak’s thrilling soprano sax stabs, spinning and swirling us into the final track, ‘Long-Tailed Flight’ - the most overtly Tarifa-styled statement on the album - that sways and sashays with all the performative swagger of a Montmartre nightclub Danse Apache. With the whole closing argument built around Sari Alesh’s keening violin lines, this is no comforting resolution. Whichever side of the door we end up on is up to us. The tune’s shifting, probing dynamic urges us to keep moving through its nylon-strung, handclapping, irresistible surge. Even the final note leaves us suspended.

Have we arrived somewhere – or nowhere? Maybe that’s the point. Listen. You decide.

MY MUSE AND I (OVERTURE)

THE PATH NOT TAKEN

THE TURNING OF THE GLASS