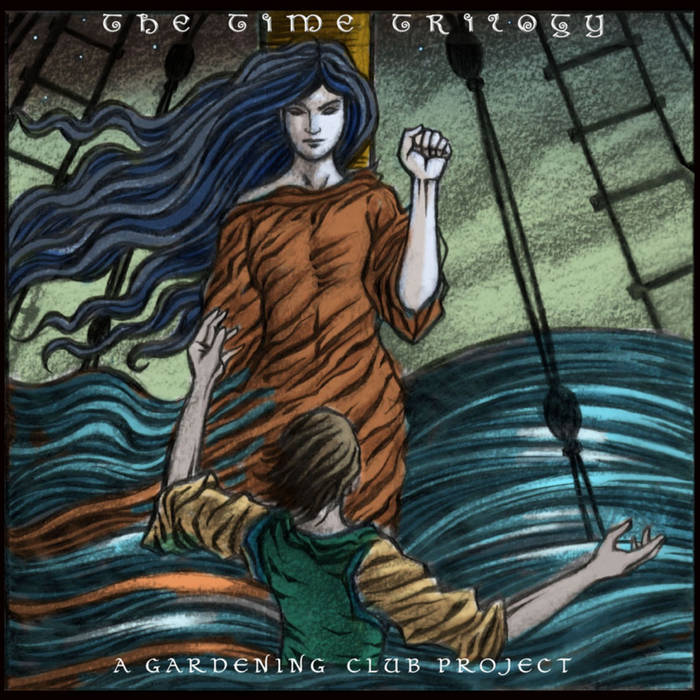 Few contemporary musicians are as adroit in conjuring the quintessentially English stylings of classic prog-rock as Martin Springett. The grandiose melodic sweep and structural complexity that decorate the timeless work of Yes, Pink Floyd, King Crimson, and Caravan come as second nature to Martin. He grew up in that world. He speaks its language effortlessly and eloquently. Fortunately – especially for us, his audience - rather than simply pay homage to the treasures of the past, he has always sought to move the story on, to add new ingredients to the mix and challenge the misplaced notion of ‘prog’ as an outdated and ironic misnomer in the 21st century.
And so, this new work – The Time Trilogy - feels like both a departure and a progression. It’s a departure (pardon the pun) that launches the listener, Ancient Mariner-style, into the storm-tossed narrative of an epic voyage - a textbook prog device, in itself - and a progression (yes, pardon that pun, too) via the deft incorporation of a contrasting musical palette rarely deployed in the coolly intellectual corridors of progressive rock. And in order to realize the full potential of this particular musical venture, the erstwhile Gardening Club guru and his current band of highly accomplished conspirators have embraced the sultry, pulsating, heat-haze rhythms of North Africa and southern Spain.
The unlikely marriage works like a dream.
These opposites definitely attract. The two worlds don’t so much collide as an embrace with the wild abandon of a couple who’ve got some serious catching up to do.
“Forever Leaving Home” opens the proceedings, venturing out into dark and threatening waters roiled by Drew Birston’s churning fretless bass as Kevin Laliberté weaves darting, nylon-string patterns around lyrics that speak of foreboding; of an ominous, edgy leaving-taking towards gathering storm clouds on the horizon. The two Sultans of String alumni are swimming in their Mediterranean, melodic-minor element from the off. The heady atmosphere is established. We’re bound for some exotic, faraway beach but whether it’s looking more like Skull Island than Riviera Paradise at this stage, it’s hard to tell.
“Sister of Theft”, with its slippery, stuttering Maroc’n’Roll rhythms, sees the waters calm and the clouds start to lift. The ocean turns to desert and in the distant, shimmering heat-glare we can just make out the approaching band of familiar musical travelers; a latter-day Robert Plant among them, perhaps. He’d be dancing to this one. And all the while, Sari Alesh’s swooping violin flurries dip and soar like a bird circling the caravan.
The trilogy concludes with “Woman in the Waves”, cooling the hot-sand temperature a touch with its ringing, 12-string acoustic chords. The storm feels more distant now as the propulsive urgency of a loping, Afro-Brazilian log-drum beat reminds us that we mustn’t linger. It’s time to unfurl the sails again.
The eponymous ‘Time’ element is complete and yet, it seems, the story is far from over.
Though not, officially, components of the previous trilogy, it’s hard to escape the links in both style and theme over the second half of the EP. The instrumental, “Finding Home”, sees us wandering far from shore again, becalmed, half expecting the slap of an approaching oar to encroach on the fragile, fogbound intimacy of this mysterious shadow-world. Until that is, the spell is broken by the dazzling burst into a flight of “Rare Birds (Young Wings)”. The wind’s picked up again, the mist has cleared, and now we’re stumbling towards the light on a lazy, lop-sided, camel walk rhythm, picking up new musical passengers as we go – xylophone, Gabriel-Esque synth swells, multi-tracked vocal washes – stretching out and rejoicing in the familiar prog-rock impulses that got us here in the first place.
All that remains is for “A Dance To The Music of Time” – both a nod to a literary masterpiece and a virtuoso showcase for the outstanding six-string and arranging skills of Kevin Laliberté – to take us home. And so we’re transported back, by Flamenco-propelled, Tarifa-bound felucca, across the sunlit Straits of Gibraltar to familiar, solid ground - all optimism and uplift, now. And just as the Time Trilogy’s opening track spoke of leaving things behind, this rousing instrumental closer hints at finding them again. There’s nothing somber here - more an elegant, courtly celebration of a proud adventure ending with a noble flourish.
One trilogy, then.

2. Part 2 Sister Of Theft / Lyrics from A Poem by Sandra Kasturi